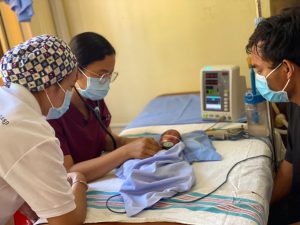 Sineath’s mother Vy was just 7 months pregnant when she went into labor in late February, 10 weeks early. She and her husband Ouch live in rural Mondulkiri province. Despite the distance, they made the 2.5-hour motorbike journey to Kratie Regional Hospital while Vy was in labor because they knew that Chenla Children’s Healthcare would be able to care for their premature newborn, while no such services exist in Mondulkiri.

Chenla doctors and nurses were in the delivery room upon Sineath’s birth and provided immediate neonatal resuscitation as his lungs were not developed enough to breath on his own. Quickly, Sineath was transferred to Chenla’s NICU where he is gaining weight, breathing well and responding to his father’s touch. Without Chenla, premature babies like Sineath are unlikely to survive after birth, with preterm birth complications the leading cause of death among neonates. Most of these babies can be saved with efficient, proper, and fairly simple neonatal care.