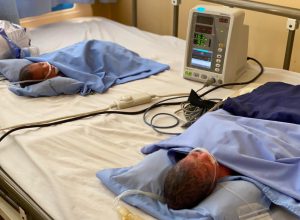 Sophan and Sitha were born at the new maternity ward in Kratie Referral Hospital. Their mother Vanna lives in Kratie along with her husband Sarat, who works as a driver for a Chinese road construction company, earning $5 per day.

Fortunately, Vanna knew she was pregnant with twins because she had received a prenatal ultrasound at a local private clinic that collaborates closely with Kratie Referral Hospital and Chenla.

They were thrilled to be having twins, but at just 32 weeks Vanna went into labor. Though common with twin gestations, early labor in a remote place like eastern Cambodia presents dangerous risks for both the mother and child (children in this case). 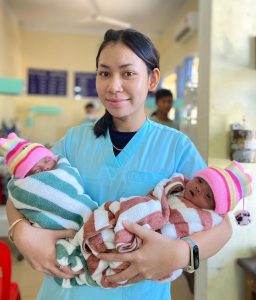 Vanna had a fever and as she began to give birth the amniotic fluid was green, not clear. This indicated an infection and meant both mother and children were at serious risk.

While Vanna recovered, the Chenla team treated Sophan and Sitha with antibiotics, nutrition, and respiratory support. At the end of a two week battle, they began life at home with their family – another step towards a healthy community. 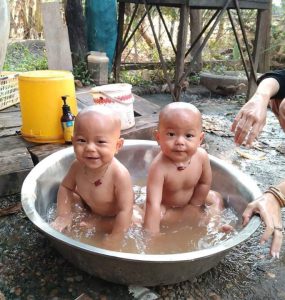