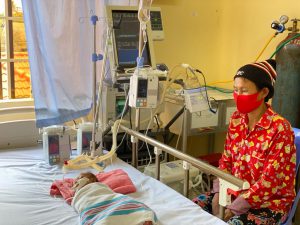 Sorphea was born at Kratie Referral Hospital in August. Immediately after birth she developed respiratory distress. The Chenla team was paged to the delivery ward where they quickly performed neonatal resuscitation and stabilized Sorphea. After being brought to the Chenla neonatal unit and being placed on Continuous Positive Airway Pressure for 24 hours, Sorphea’s condition worsened. Normally, in this part of Cambodia, Sorphea would have died.

However, because of donor/partner support, Chenla has a higher level of care available and Sorphea was placed on life support including ventilator care.

The battle was on.

Sorphea stayed at Chenla for 53 days and was placed on and off of life support care during that time. Eventually, by following neonatal protocols including nutrition protocols, the Chenla team helped Sorphea fully recover. On October 20th, Sorphea went home healthy and strong. 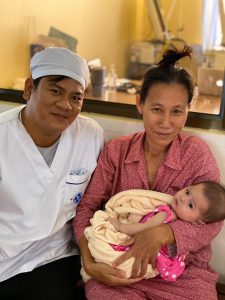 It is always coordinated teamwork that helps get a patient like Sorphea through. Housekeeping plays a particularly important role in keeping the clinical care area clean and safe. Maintenance keeps the ventilators and CPAP machines working well. Nursing ensures that neonatal protocols are followed and the physician team coordinates the complicated clinical care required each day.

Hard working but happy, the Chenla team is very thankful to now be able to fully help patients like Sorphea.